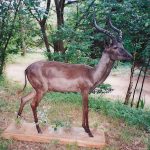 Canned Killings and other Unnatural Behaviour in the Game Ranching Industry 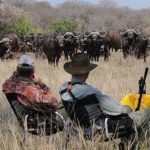 What do Pyramid Schemes and the latest trend of intensively breeding and manipulating new colour variants and other unnatural freakish animals have in common with one another? Pyramid Schemes are defined by Wikipedia as, “an unsustainable business model that involves promising participants payment or services, primarily for enrolling other people into the scheme, rather than supplying any real investment or sale of products or services to the public.”

They go on to add, “A successful pyramid scheme combines a fake yet seemingly credible business with a simple-to-understand yet sophisticated-sounding money-making formula which is used for profit … The flaw is that there is no end benefit. The money simply travels up the chain. Only the originator (sometimes called the “pharaoh”) and a very few at the top levels of the pyramid make significant amounts of money. The amounts dwindle steeply down the pyramid slopes. Individuals at the bottom of the pyramid (those who subscribed to the plan, but were not able to recruit any followers themselves) end up with a deficit.”

Does this ring a bell? Does this sound similar to what is going on in this abnormal market?

The Federal Trade Commission warns, “It’s best not to get involved in plans where the money you make is based primarily on the number of distributors you recruit and your sales to them, rather than on your sales to people outside the plan who intend to use the products.”

If you accept that the only way for these breeders and manipulators to make money over the long term is to persuade hunters to pay to “hunt” these weird beasts then, to date, they have been very unsuccessful and it would seem that most, if not all, of the sales have been from one breeder to another at ever increasing prices. In other words, the sales are not “to people outside the plan who intend to use the products.”

Well, is it not a valid point that this is a new “industry” and, in time, hunters will come round to “hunting” these never-before-seen-in-the-wild animals? In other words, is this not similar to the philosophy, “If we build it, the people will come”? Not if CIC – The International Council for Game and Wildlife Conservation is concerned. This body, arguably the most prestigious hunting and conservation association in Europe, which counts 38 countries as members along with major conservation bodies like IUCN, CITES, TRAFFIC and FAO, passed the Wildlife and Commercially-Bred and Formerly Wild Animal Recommendation in 2011 in which it opposed “artificial and unnatural manipulations of wildlife including the enhancement or alteration of a species’ genetic characteristics (e.g. pelage colour, body size, horn or antler size)”.

Another member of this august body is The Boone and Crockett Club, the most influential and admired hunting and conservation body in North America who obviously echo these sentiments so it can be seen that the potential hunter market for these unnatural colour variants and freaks is shrinking as none of the members of these powerful bodies, nor those they influence, will be interested in “hunting” these animals.

We know that the vast majority of the 300 000 South African hunters are meat hunters. We also know that most trophy hunters – those that could potentially be the most interested in hunting difficult or unusual animals – are from overseas. We further know that trophy hunters, particularly overseas recreational trophy hunters, like to enter the animals they hunt and which qualify into one of the two major international record books – Rowland Ward’s Records of Big Game (established in 1892 and the oldest) and SCI’s Record Book of Big Game Animals.

In conversation with the owners of Rowland Ward, they stated categorically that they will neither create separate categories nor allow the entry of these animals into their record book. In response to my written query, Chris Emery, the Chief Master Measurer of SCI wrote, “SCI’s Record Book Committee has no intention of accepting any color variations or unnatural crosses of species into the SCI Record Book and will not be creating any categories for these unnatural species.”

This would seem to be another major factor restricting the potential market for these manipulated and unnatural freaks. This, in turn, would seem to explain why so much effort is being put into opening the Namibian market to the sale of these animals. New entrants are required at the base of the pyramid to channel the money up to the “pharaoh” at the top because there are little or no sales “to people outside the plan who intend to use the products.”

This also would tend to explain why so much time, effort and money is being used to advertise and persuade people to enter the intensive breeding and game manipulating market. Why it is being portrayed as the next best new investment opportunity.

Unfortunately, the old adage, “If it sounds too good to be true, it probably is” is as true today as it was at the time of the Kubus pyramid scheme. Remember that? Those who are already involved in this dubious and controversial business should take note and those who are not but are considering entering into it, should think very, very carefully before proceeding further.