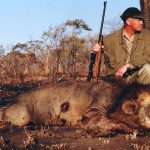 How many times has it been said that, “Hunting will not last 10 more years”. I have heard this statement made many times in my hunting career which, to date, spans some 25 years. To me, and for the very first time, this statement is starting to ring true although I cannot be totally sure of the actual time frame.

Hunting is disappearing in Africa, of this there can be absolutely no doubt. Today it is not a patch on what it was even 10 years ago, a fact seemingly unnoticed by many South Africans in the game and hunting industries. In the recent past we lost both Botswana and Zambia and, although Zambia has now reopened, much damage will have been done over the past two years of inactivity through the poaching of game. We can only hope that all will once again thrive through responsible hunting.

Zimbabwe is not close to what it once was, not by a country mile. The CAR is now regarded as one of the most dangerous countries on earth. Boko Haram threatens parts of the Cameroon. These may be perceptions to some but realities to many paying clients concerned about their well-being when it comes to booking hunts and paying deposits.

I can accept that much of the decline is exceptionally hard to control. For example, socio-economics factors in Africa play a huge role. Amongst them poverty, population explosion, unemployment, political interference, incompetent governments and corrupt officials are all factors that create environments where hunting suffers. An unavoidable chasm in Africa you may well be right in thinking.

However, when the threat comes from within and from forces that we can actually control, it is far more dangerous to our existence. The term “treason” comes readily to mind! A dictionary’s definition – “the betrayal of a trust or confidence; treachery”. A strong statement? An uneducated fool’s ramblings? Or maybe a truth that many do not wish to hear?

In the current turmoil of the hunting world, Africa and, more to the point, South Africa, has what no other continent or African country, respectively, has to offer. Unquestionably the largest variety of quarry species on the continent, we also have the most varied hunting habitat anywhere in Africa. We are logistically advantaged, we offer a first world tourism service…I can go on and on, the list is long and distinguished. We have the opportunity to create the finest hunting destinations for quality, experience and value anywhere in the world. In this we have no peers even if our erstwhile neighbours are included in this comparison! Why then the clear feeling of negativity in this writing?

The game industry in South Africa was born on the back of professional hunting – an indisputable fact. Out of cow, sheep and goat dung and barbed wire misery a Phoenix was born. Outfitters offered more money to domestic livestock farmers then they ever would have imagined possible for half the work and even less expense.

The industry grew, wildlife numbers increased and the game ranching industry flourished as did the outfitters of that era. All rightly so and all cards fairly dealt. A fairy tale of conservation success. Oh how those heady days of early beginnings and solid relationships between hunter and farmer have now diminished. In many cases the symbiotic relationship is no longer what it was. Landowners – often wealthy businessmen with no acumen for anything other than money making – pull the strings of a once glorious industry. The puppeteers control and the puppeteers will reap the rewards of their ignorance of an industry that few ever truly understood and even less are truly successful in.

South Africa has been tagged as a joke for many years by much of the African hunting fraternity. A misconception for sure but, at times, we do ourselves no favours in attempting to stem the tide of criticism. We have ridden this negativity with aplomb, business has continued to come to our shores and for that we can be grateful.

Today a very different threat now lurks. Our hunting grounds are being carved up into breeding pens, colour variants flourish. They are a worthless addition to our famed “conservation ethic”, contrary to the drivel those that pedal these obscenities, spout! “They are bred for the demand of the hunting industry” they say. How noble of them to consider us, while they actually dupe many to pour their life savings into the “future” of game ranching. When all have acquired the “golden geese”, whom will buy the eggs, I ask?
Without question it will not be the hunting industry. Our clientele by and large hunt for the experience of an African safari, hot coffee around hotter fires, wild animals in wilder areas with the possibility of the unknown and the assurance of value for the product we offer.

Coloured, line bred, caged, corn fed, photographed, vaccinated, catalogued and priced through ignorance, these Frankenstein freaks are not on their radar and never will be. The oversupply and lack of demand for these animals will very soon become apparent and the term “tulip mania” will once again come into play – a term used metaphorically to refer to any large economic bubble (when asset prices deviate from intrinsic values)!

This scourge, is now combined with the latest threat – the sale, for once again obscene prices, of quarry species with horns over a certain length and we see the removal of these animals from their natural environments into breeding pens in the hope of recreating their genes and breeding large horned, artificially
raised “trophy” animals.

Market pricing is a free beast, capitalism ensures this. However, when greed supersedes longevity, it is highly dangerous. Short term gain over long term security will always have its victims. In this case professional hunting through the marketing to clients, be they foreign or local, is going to suffer hugely. The allure of seeking that elusive 60 inch kudu bull, 30 inch nyala or 45 inch buffalo is slowly but surely being eroded. Many landowners currently refuse to allow us to hunt animals of this size, stating that such specimens are worth far, far more to the breeder. If we wish to hunt them then the price offered to us is so exorbitant most would be too embarrassed to even offer it to a client. Also, as soon as the clients realise that coming to South Africa removes the chance of finding that elusive trophy in the wild, they will seek other options. Most definitely!

The even greater victims will be the very game that was saved through hunting as, when the flow of Dollars, Sterling, Euros and Rubels dries up through the lack of desire to participate in the un-Hemingwayesque practices that now abound, the scent of cow dung and unsightly lengths of barbed wire will once again pervade the bushveld and our sons will weep for the opportunity that our generation took from them!