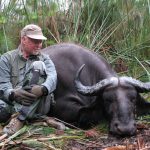 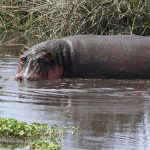 If a person wakes in the middle of the night with drops of perspiration rolling down his forehead, it is not because you live in Hoedspruit, but because you cannot help of dreaming about the bull of all bulls, a genuine trophy kudu bull. I saw him for first time, shy and retiring, just as he disappeared behind a red bush at the sound of the hunters’ shoes on the ground behind me. I quickly told them to be quiet and stand dead still. The bull peered at us as if to say, "Look and look carefully because you are not going to get me today." The clients still wanted to ask questions but I said quickly, "He’s already gone." I could just not forget the kudu bull, the grey brown horns, one straight and the other with deep curls, his broad head and proud gaze.

The second time I saw him was from an air force helicopter. The Hoedspruit region is known for its air force base and, if we are lucky, sometimes us civvies can go along for a ride. That afternoon we flew backwards and forwards low over the town. I asked if we could look at the farm from the air and, because the base bordered the farm, it was not a problem. Woep, woep, woep, the helicopter blades echoed off the bush low beneath us. I saw giraffe, impala and blue wildebeest, even a shy steinbuck under the trees and then, suddenly, there stood my Kudu Bull! I could not believe it! And, just as suddenly as he appeared, so, in the blink of an eye, he disappeared …

At a quarter to five one morning I was driving down a fence line. Summer mornings are best at Welverdiend, the fresh air and smell of the earth after the night’s rain storm, birds in the trees singing their songs for everyone to hear. Suddenly, around a corner in the bush, something caught my eye, no, it could not be … my Kudu! But something was wrong. He looked tired and sick. I quickly turned off the engine so he would not get a fright. Hunter and Kudu stared at one another. He had lost weight but his horns looked longer and thicker than ever. The big brown eyes looked attentively at me but there was no fight in them, nothing left of the legendary "Grey Ghost". He turned slowly and disappeared into the bush. I drove home to fetch my firearm. Roftie was still heading towards the bakkie as I left. That Kudu was not going to last long and he was going to be hunted today.

I followed his spoor. Slowly and calmly, because he was not going to go far. Or so I thought. Eventually, two hours before midday, I picked up his spoor again and knew it was not going to be long now. I walked with a tired tread, step by step. Where would the Old Man have gone at this time of the day? Water, that is where. He would drink quickly and then shoot off. I picked up speed and headed to the river. There were still pools of water and that is where he would drink and be able to walk softly, more difficult to walk but softer. And that’s how I followed him for 15 minutes all down the course of the river. Suddenly his spoor disappeared in the river course. It would be difficult in the river course. It was thick along the sides and the Kudu could be anywhere. I walked carefully forward and then, just as the Big Uncle above wanted it, he walked out in front of me.

I hear my heart thundering in my ears and know it is now or never. There is no time to seek a rest against a tree, 180 paces, my 9.3×62 is in the nook of my shoulder and I am beside myself. Everything happens in the blink of an eye. The shot stirs up everything – monkeys scream, birds fly off screeching – everything is mixed up. And then the bull drops in his tracks and roars a strange roar, one that I have never heard before and, with the last of his strength, stands up, looks at me as if I owe him money, trots 50 yards and there bites the dust, roars again that strange sound and then everything is over. A dead silence reigns over the bush and all I can hear is the 9.3 cartridge case as it falls from the chamber onto the sand. The CDP 286 grainer has finally done its job.

That’s when it sinks in that this is not just any Kudu, this is a Trophy Kudu. "Siegfried Osmers you won’t believe me I got him" Siegfried first says nothing. There is silence on the other side of the line and then, "I am on my way." We went to fetch the farm workers and, when they saw the Old Man there was something strange in the air, unbelievable respect for the Grey Ghost that lay at our feet who, for so many years, had carried his horns on his powerful neck. Down his neck and over his face were marks made over the years from fighting over cows and grazing simply because he could.

I walked to the truck to fetch my measuring tape, 60 inches and the tape was at its end. "You are short 12 inches," said Siegfried. Then the moment became too much for me because, as a young boy, I dreamt of shooting a kudu that stretched beyond the limits of my tape. Siegfried clapped me on the shoulder in congratulations. My workers loaded the Kudu with such respect and regard; they were all quiet in honour of Nhoro the Great Uncle of the Bush. That evening it hit me as to what I had done, almost as hard as the bullet that had hit the Kudu.

A good and honourable end to the Legend of Welverdiend.