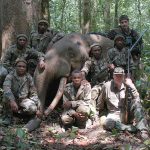 Setting record prices has become the norm for SA’s wildlife industry in its quest for the ultimate best of breed and big financial rewards. These high prices account for a large part of the sales at wildlife auctions rising from R60m in 2006 to R864m in 2012, a trend game-breeding players predict will continue.

At the forefront of soaring prices are what Wildlife Ranching SA (WRSA) terms “rare species”. These include buffalo, sable antelope, roan antelope and Livingstone eland, which accounted for a combined R689m (80%) of sales in 2012. Average price rises since 2006 ranged from 270% for roan to 670% for buffalo.

Game breeder Bernard Groenewald sums up the sector’s optimism. “There will be market fluctuations and prices will go up and down, but the bubble will never burst,” Groenewald told delegates to the 2013 WRSA congress. “The high demand for superior genetics will always ensure a premium for top breeders.” Adami adds: “Top-quality genetics command a high premium.” Prices of top-quality breeding animals are around 30 times those of their standard counterparts and the gap is widening, he says.

“The rise in prices is more than sustainable,” says Jacques Malan, a game farmer and former WRSA president. Malan holds the record for the highest price yet obtained by a breeder: R26m for Horison, a buffalo bull. Sold in 2012 to a syndicate of three buyers, Horison smashed the previous record for a buffalo bull of R18m, set in 2011. He dwarfed the 2005 record of R165000. “They should make their money back [on Horison] in three years,” says Gert Dry, a former WRSA president.

The goal is to breed animals with horn sizes sported by animals largely wiped out by indiscriminate hunting, primarily in the 19th century , says Neil Swart, a Vleissentraal game auctioneer. “Not long ago a sable bull with 34-inch horns was regarded as big,” says Swart. “In 2012 we had the first 50-inch sable bull and it sold for R12,25m. This year we have two 50-inch sable bulls.”

Even Horison’s record is on shaky ground. His horn spread (width) of almost 51,5 inches is not enough to match the 53 inches of a buffalo bull to be offered at the Thabo Thula auction later this year, says Swart.

Adami believes the focus on breeding the best specimens places SA in a powerful position in the global ecotourism market. “A growing middle class in the developed world and especially in developing markets will continue to create a growing demand for wildlife experiences,” says Adami. “In turn, this will create demand for greater numbers of magnificent specimens of the rare African species.”

SA, he says, is uniquely positioned to support this demand. “It is because we run our ranches with increasingly superior animals from the most attractive species.” But not all wildlife experts are convinced rising prices for top breeding game are sustainable. “In the end it depends on what hunters are prepared to pay,” says Peter Flack, a wildlife author, hunter, conservationist and trustee of the Southern Africa chapter of the World Wide Fund for Nature.

Foreign and local hunters directly and indirectly generated R6,2bn in revenue in 2010, environmental affairs minister Edna Molewa noted in her 2013/2014 budget vote speech. Hunting, says Flack, is the backbone of SA’s wildlife industry and underpinned its recovery from the brink of disaster 50 years ago, when there were just over 550000 head of game, including those in national and provincial parks. Today there are more than 18m head of game on more than 12000 game farms alone.

“I can see a case for paying R1,65m for a nyala,” says Flack. Nyala, together with roan and sable, is one of the “glamour” hunting species. “I am more concerned about buffalo prices,” says Flack. “There are still a lot of places in Africa where they can be hunted. Prize buffalo are still readily available in other parts of Africa. Buffalo have not been shot out in Africa, nor have the body and horn sizes deteriorated.”

SA-based International Council for Game & Wildlife Conservation (CIC) executive Gerhard Damm agrees. Posing a rhetorical question, he asks: “Why come to SA when you can hunt a trophy-size buffalo for US$20000 elsewhere in Africa?”

Subject of even hotter debate is a more recent addition of colour variants to WRSA’s list of rare species. Growing in number, they include black impala, gold wildebeest and king wildebeest.

Prices are impressive. Topping the list is a king wildebeest sold for R5,1m, the fourth-highest price achieved at a game auction. In sixth position is a gold wildebeest, sold for more than R1,8m. Flack is not impressed. “They are creating brand new unnatural freaks,” he says. “In my 53 years of hunting I have never heard of anyone who has seen one in the wild. It does nothing for game conservation.”

Damm is also opposed to colour variants. “It is like breeding new varieties of cattle or dogs,” says Damm. “The CIC passed a resolution two years ago declaring colour variants a manipulation of wild game that should not be hunted.”

There is another risk, warns Damm. “If colour variants were to escape, it could have a serious impact on normal game,” he says. The risk is now the subject of a study by the University of Stellenbosch, commissioned by the SA National Biodiversity Institute.

Adami springs to the defence of colour variants. “Colour variants are not freaks and are not bred through genetic engineering,” he says. “White lion, for example, are found in the wild.” Adami also believes if colour variants were to mingle with normal coloured game of the same species there would be no impact. This, he says, is because the gene producing colour variants is a recessive gene.

Malan is equally in favour of colour variants. “We are not creating something new,” says Malan. “In the old days [colour variants] had no value and were shot out. This is why no-one has heard of them.”

In addition to white lion, he points to the rare king cheetah as another variant (in terms of markings) found in the wild. Where there is no controversy is the game industry’s potential to help ensure food security. “SA is scratching the surface of its venison production potential,” says Adami. “New Zealand produces 50 times as much venison as SA.”

Based on a 2012 estimate by Camdeboo Meat Processors MD Piet Neethling, SA’s venison market is worth just R300m-R400m annually while springbok, the primary venison export, earns SA a mere R60m-R70m. SA’s imports of red and white meat are running at about R4bn/year.

Venison production also holds great empowerment potential. “There is 12mha of overgrazed communal land that can be used for sustainable game farming,” says Adami. Used productively, the land could support a big meat processing industry owned and run by rural communities, he adds.

“The game industry’s vision is totally aligned with government’s growth strategy,” says Adami. “There is no reason it cannot grow from being a R10bn/year industry into a R100bn/year industry.”

I refer to your article, Game price stampede, in the 15 August issue.  While I have managed our family game ranch for 20 years and been a partner in a safari outfitter for 12, I have had no interest, direct or indirect, for the last three years in any game ranching or hunting operation, although I remain passionate about hunting and the conservation of our wildlife and wildlife habitats.  The same cannot be said for Messrs. Adami, Malan, Grobbelaar and company, however, all of whom have vested interests in breeding and/or selling “wildlife” and whose statements in the above article are disingenuous at best and misleading at worst.  In this regard, I advise as follows, namely: