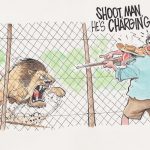 PHASA President Calls for a Review of Lion Hunting

Here are some negative comments I have received recently via Facebook and email:

Date: 30 July 2015
From: Shauna Carroll
Email: slc2106@gmail.com
Comment:
You are everything that is wrong with mankind today. By all means do your hunting…but maybe try without a gun and you will find that will be your last hunt. Fair game with a gun? I think not you’re a disgusting, vile and poor excuse of a man!
To hunt these incredible, majestic animals there is clearly something wrong in your head…probably hiding some deeper, darker, ugly secret. That is all.
My Response:
Dear Shauna,
Every now and then I receive an email from someone I do not know along the lines of the one you wrote to me. Some are far harsher and threaten to kill me or hope I contract cancer and die a lingering and painful death. Normally I ignore them because I do not know where to begin to reply. There just seems such a gaping chasm between what I believe and practice and views like yours, plus I often experience the knee-jerk response of wanting to reply in kind. At any rate, let me try and explain why I do what I do.
Firstly, let me say at the outset that my life’s passion has been the conservation of wildlife and wildlife habitat in Africa, in general, and South Africa, in particular, and I have devoted most of my disposable time, effort and money to this cause. I am a trustee of WWF Southern Africa, a life member of the Endangered Wildlife Trust and a founder member of both the Peace Parks Foundation and the SA Wildlife College as well as a life member of six hunting and conservation associations.
About nine years ago I listened to Canada’s top wildlife biologist, Shane Mahoney, speak in Belgrade after the showing of the documentary of North American Conservation Model and resolved to see if I could do something similar in Southern Africa. After six years of research, together with him, I produced the South African Conservation Success Story. The empirical research for the project was checked by an independent researcher over nine months and disclosed the following facts:

Kind regards,
Peter Flack
Shauna Carroll’s response:
Dear Peter,
The fact you feel the need to reply with an essay to justify your actions doesn’t make what you do any more acceptable. You are painting yourself out to be a giving human being who is looking after the animals, that is clearly not the case when you hunt them yourself.
We clearly disagree and maybe you should look at the outcry following Cecil’s death and relook at your own motives/actions…its like me saying I kill children but its ok because i am a volunteer at NSPCC…
Regards,
Shauna
My response:
Dear Shauna,
Thank you for your email. Firstly, hunting and caring deeply about wildlife and wildlife habitat are not mutually exclusive as you say. Given that land available for wildlife is limited and wildlife reproduces at between 25 to 35% per annum, sooner or later given their increasingly restricted available habitat, animals will have to be hunted, culled or caught, else they will starve to death as is happening in Botswana currently.
Secondly, I have always opposed poaching wherever and whenever I have come across it and that is what happened to Cecil. The reality is that animals are poached in their hundreds every day in Africa and, to quote but one example, poachers, predominantly from Mocambique, have killed some 500 rare and scarce rhinos and hacked off their horns – often while they were still alive – in just one national park in South Africa this year alone. Cecil was poached without a licence on land confiscated from the original owner by President Mugabe and given to one Happy Ndlovu.
Thirdly, to state the obvious, killing a child is murder and illegal while hunting is neither but, as I tried to show, an essential part of conservation in Africa. But let me ask you this – do you eat meat? Do you wear leather shoes or sit in cars with leather seats? How much time, effort and money do you devote to the conservation of wildlife and wildlife habitat in Africa or elsewhere? Or do you confine your efforts to sending emails like the ones you have sent to me? If you want to do more, I am happy to devote the time and effort to show you how you can.
Kind regards,
Peter
Shauna Carroll’s response:
Dear Peter,
Thank you for your email. Actually no you are the first I have emailed as a news article about yourself appeared in light of Cecil and the dentist was at that point unreachable…
I think its great you are involved in these projects but why would you want to kill the animal as part of this?
I am involved in homeless charities and raise for an animal charity in Thailand. For me its just the killing of these incredible animals and I cannot for the life of me work out why you would.
Kind regards,
Shauna
My response:
Dear Shauna,
Thank you for your prompt reply. You pose a question that every genuine hunter wrestles with regularly and I am no exception. Quite simply, how can we kill the animals we are so passionate about and spend so much time, effort and money conserving? I tried to answer this in my first email to you but clearly did not do a good enough job and I am not sure I can do any better on the second attempt. I think there are some things that make and have made it easier, for example:

I think, however, if we are to continue this debate, you should really have a look at The South African Conservation Success Story documentary. If you can email an accessible address, I will mail you one for free. Once you have watched it, you may understand my point of departure on conservation a bit better.
Kind regards,
Peter

Date: 30 July 2015
From: I will Kill you
Email: youfuckingcunt@gmail.com
Comment:
Peter, you are the most fucking disgusting cunt on earth apart from this Theo fucker boer (as you might be too dickhead), killing beautiful and rare wildlife and lions for “sports”.
You fucking coward will soon (!) receive some of your own medicine….I made contacts with some local people, who really like to hunt you down for a trophy, paid by myself! It’s worth spending money for that…:)
Watch out, your days are counted you faggot 🙂 And I will be looking forward to read the local newspapers about your “sudden and unexpected death”…LOL…
Enjoy your last days…you will die in fucking agony mate 🙂
xxx

Date: 30 July 2015
From: Mike Saunders
Email: mike.saunders@gmail.com
Comment: How is you hunting with weapons a fair game? A monkey could shoot you dead. I hope you and your family are skinned alive

Date: 29 July 2015
From: Louise Bell
Facebook page: https://www.facebook.com/louise.bell.9889
Comment: I don’t understand how you can claim to be an advocate of conservation when you go out and kill these beautiful animals. The two do not go hand in hand – it’s like trying to cure hunger by stitching peoples mouths up, ‘they can’t be hungry, look, they’re not even attempting to eat’. Nonsense. You are cruel and heartless and you should be ashamed of what you have done. Why is your ego more important than the survival of majestic creatures? And can’t you help conservation without bloodshed?

Date: 29 July 2015
From: Peter Morley
Facebook page: https://www.facebook.com/peter.morley.39904
Comment: You are a piece of fucking shit and if I ever have the displeasure to meet you I’ll make you regret your life. People like you epitomise what is wrong with the Human race. You are shit, pure and simple.