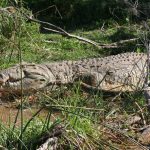 Crocodiles – Birds Or Lizards?
Blog
The Elephant in the Room
28 May 2013 by Peter Flack in Blog

A debate entitled, The Elephant in the Room: The ethics of collecting natural history specimens and their role in today’s society, was hosted by the Iziko South African Museum in their lecture theatre. Seven main speakers were invited including the animal rightists, Professor Pippa Scotness from the University of Cape Town and her colleague, Fritha Langerman, three other professors from the universities of the Western Cape, Cape Town and Stellenbosch, Denise Hamerton, the Curator of Terrestrial Mammals at the Museum, as well as myself. Here are my introductory remarks for those who may be interested.

The elephant in the room is hunting and I am a hunter.  I am also a trustee of WWF Southern Africa, a life member of the Endangered Wildlife Trust and founder member of both the Peace Parks Foundation and the Southern African Wildlife College where I have been teaching earlier in the week.  Quite simply, I have devoted most of my discretionary time and substantial effort and money to the conservation of wildlife and wildlife habitats.  They are two of the key driving passions in my life.

To quote but one example – I bought an eroded and bankrupt, 7 000 acre sheep and goat farm in the Karoo and, over 20 years and at a cost of millions of hard earned rands, transformed it into a modern and model commercial game ranch hosting most, if not all, of the species that originally inhabited the region, almost none of which were present when I bought the property.

For my sins, I have managed gold mining companies in nine African countries and have hunted and travelled extensively in 15 and, therefore, have a reasonably good understanding of what passes for conservation in over half the 37 countries comprising sub Saharan Africa and I can say, without fear of contradiction by scientists or major conservation bodies like the United Nation’s IUCN, that ethical and sustainable hunting is the major hope for the conservation of wildlife and wildlife habitats in Africa.

Kenya banned hunting in the late 1970s and, by its own admission, has lost over 80% of its wildlife since then.  Zambia banned hunting for two years in the 1990s – ostensibly because of corruption in the award of hunting concessions – and saw wildlife decimated in most of its previous game management areas, to such an extent, that many of these areas have not recovered to this day.

Both Uganda and Tanzania also banned hunting at roughly the same time as Kenya but, whereas Tanzania rescinded the ban shortly thereafter, Uganda only did so in 2003.  The result has been clear for everyone to see.  Wildlife and wildlife habitats in Uganda have been severely depleted but they are flourishing in Tanzania.

Closer to home, Namibia entrenched hunting in its constitution – the only African country to do so – and introduced enabling legislation in the 1990s allowing rural people to establish hunting conservancies on state land.  Currently, hunting generates almost 6% of Namibia’s gross domestic product and, over the last ten years, previously endangered animals such as the desert elephant and Hartmann’s mountain zebra have recovered from 150 to nearly 1000 in the case of the elephants and  to over 26,000 in the case of the zebra.

In South Africa, by the 1970s, game was in a parlous state.  The blue buck and quagga were already extinct and four other species, black wildebeest, bontebok, Cape mountain zebra and white rhinoceros were following hot on their heels as there were less than 50 of each of these species left.  Pursuant to a 1964 survey referred to in Professor Jane Carruther’s book, Wilding the Farm or Farming the Wild, total game numbers were reduced to a mere 557,000 animals.

In 2005 a similar survey found game numbers in South Africa had recovered to 18,7 million animals.  What were the reasons for the decline and the subsequent recovery?  It has been empirically established that the major reasons for the decline included the two Anglo Boer wars, the two world wars and the depression in between, government killing animals under the mistaken impression they harboured the tsetse fly – which caused sleeping sickness in humans and nagana in livestock – drought, disease, the commercial killing for hides and ivory and, the biggest cause, namely, farmers killing game for food and to make way for domestic livestock.  The number of animals killed by recreational hunters, the first of whom arrived in the Cape only in 1834, long after the blue buck was already extinct, were insignificant by comparison.

It was the closure of hunting in Kenya, Tanzania and Uganda which, ironically, was the saviour of South Africa’s wildlife and wildlife habitats.  Hunters streamed south and, suddenly, farmers were being paid more for a springbok than a sheep, more for a kudu than a cow.  Hunting blossomed here. From a mere three game ranches in the 1970s, there are now over 9 600 hosting game.  Together they cover some 21 million hectares, more than three times all the land covered by the national parks and provincial reserves put together.  Quite simply, we now have more game and more land set aside for wildlife habitat than at any time in the last 100 years.

This has brought with it many benefits other than just the recovery of our wildlife and wildlife habitats.  This quiet conservation revolution which hunting introduced also brought with it tens of thousands of jobs in rural areas where they are needed most, the prevention of veld erosion, the recovery of millions of hectares of land that were previously eroded, the solution to food security, the provision of low fat, low cholesterol and low sodium protein without antibiotics or growth hormones, the introduction of billions of rands of foreign exchange into the economy by overseas recreational hunters.  In brief, stopping hunting would eliminate all these benefits to the people of this country and result in the destruction of the bulk of the game itself.

Of course, the killing of anything for any reason is a controversial matter, particularly in a society where so many people in urban areas are removed from any interaction with wildlife and wildlife habitats and whose views on these subjects are largely informed by many of the anthropomorphic programs seen on National Geographic, the Discovery Channel and those produced by Walt Disney.  In addition, given that, according to Free State University, there are over 300,000 hunters in South Africa, it is inevitable that some will engage in unethical behaviour and cruelty to animals as would be the case with any similar size group of people. Of course this justifiably further enrages opponents of hunting and it is here that all of us should focus our efforts and not allow these isolated and horrible cases to either blind us to or undo the good that ethical and sustainable hunting has brought to this country, to many of its people and the very wildlife and wildlife habitats themselves, including giving children and others the opportunity to see and study wildlife up close and personal in museums such as this which has been the real reason why I have donated my collection.