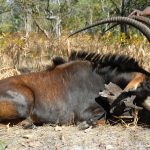 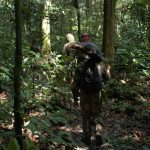 I and four of my friends have hunted with French professional hunter, Christophe Morio, on a number of occasions in both Benin and CAR. In our opinion, he is not only one of the best PHs operating in West Africa and Tanzania today but is also an experienced naturalist. While he is passionate about the full range of fauna found on the African continent, the species which brings a particular sparkle to his eye and with which he often interacts in the Central African Republic, is bongo, an animal which, in his opinion, is the top African game icon.

So, Christophe, tell us about your first encounter with the bongo?

My first sight was fleeting one. It was late in 2005 in the Ouadda region along the Boungou river in north eastern CAR. We had found numerous bongo tracks both near the various salt licks and in the heart of the densest bakos – bako is the Sanga word for forest but French professional hunters used it to describe a finger of rain forest on either side of a watercourse. Accompanied by a hunting friend of mine and his wife, we chose the tracks of a big bull and followed them relentlessly for five days before we caught a glimpse of the bongo in a small clearing. My friend missed the bongo but this brief encounter only served to increase my curiosity about this most magical and mystical of antelopes. My eagerness to see and learn more about this amazing animal soon became an imperative. More than anything, I wanted to try and outwit this the holy grail of all serious spiral horn hunters.

And since the first encounter?

I had to wait until November, 2006, at the beginning of the dry season, to finally satisfy my thirst for a Pami, as they are called in the local Bandar language. At the time I was busy building tree stands overlooking various salt licks in the hunting concession at the start of the hunting season. By the way, salt licks are very good places to find out which animals are frequenting the neighborhood. During my construction operations at the different salt licks, I saw a multitude of different animal tracks – Central African savannah buffalo, red flanked duiker, harnessed bushbuck, giant forest hog and then, to my absolute delight, bongo. It was also during my work there that I had my first two real encounters with this majestic antelope, first with a herd of six animals and the second with a lone bull, all of which I obviously immortalized on film.

When was your first successful hunt and, after that, were there any others?

Indeed, in March, 2007, I had the good fortune to hunt with an old South African client, Peter Flack. He shot a fantastic, old – no, ancient – bull at a salt lick called Batou in north central CAR. And what a bongo, the trophy horns carried by this incredible bull measured over 36 inches, which made it the new world record according to Rowland Ward’s Records of Big Game. In my wildest dreams I never imagined that one of my clients would take such a magnificent animal. Since then my clients have shot many bongos and I have photographed literally hundreds of them. For example, in 2009, I saw 131 bongos and, in 2010, a further 92. From my notes it is clear that the best times to see these antelopes are in January and April, respectively, when the salt licks are flooded.

Apart from CAR, which countries also play host to bongo?

The geographical range of the bongo extends from Sierra Leone, through the Congo, to Kenya’s forests in the Aberdare mountain range. There the antelope has a darker colour than its cousins in West and Central Africa. The strange thing, however, is that in north central CAR where I hunt, bongo is not listed as being present in any of the books. Funny and surprising, not so? But despite this relatively widespread distribution, only two African countries allow bongo hunting under license and they are Cameroon and CAR.

What is its preferred habitat?

The bongo is primarily a forest species. He enjoys dense cover and the gallery forests along rivers where he can find the food and tranquillity he both needs and wants. In the dry season, he only rarely leaves these havens of peace. On the other hand, during the rainy season, when the grass is high, he does not hesitate to visit and spend time in the savannah areas bordering the rain forests.

What can you tell us about the manners of this secretive antelope?

It is a gregarious and non territorial animal that is never found too far from a salt lick. Its senses of smell, hearing and sight are highly developed. Herds consist of five to 25 animals, usually with one mature bull and one or two younger bulls within a matriarchal structure. Old bulls tend to be solitary. Bongo are most active during twilight hours and at night but move around during the day when it rains. Usually the antelopes spend the day ruminating in thick cover. They are shy, suspicious and furtive by nature. They have a dorsal crest which they raise when roused and have a good turn of speed. When startled they can run away at a full gallop, muzzles high and horns stretched out on either side of the neck. In groups they appear less nervous and can be aggressive towards one another, probably to establish their rank. Bongos produce several different sounds according to their mood. They grunt, make mooing noises and, like bushbuck, situtunga and kudu, bark as well. They are selective grazers but seem to prefer plants with a high protein content. They consume leaves, young shoots, bark, flowers, fruits and roots and use their horns as implements to dig or break branches. The mineral salts that they find amongst the ashes of burnt trees or at salt licks are an important part of their diet.

A few words on its morphology please?

The average shoulder height is 125 centimetres (just over four feet) and its weight can vary from 220 to 400 kilograms (484 to 880 pounds). Its colour is a dark reddish tan verging on orange. As the males become older their colour darkens. Their coat is marked by 11 to 14 white stripes that help camouflage the animal. Sometimes the number of stripes on the animal varies from one side to the other. Bongos have a white mark on the chest, a chevron below the eyes and two white spots on each cheek which sometimes merge with one another. The tail is very bushy and the ears are large. The lyre shaped horns are amber brown in colour with white tips and are carried by both sexes.

The bongo reaches sexual maturity between 24 and 27 months. The female is receptive every three weeks for three days. She gives birth after a gestation period of nine months. Twins a very rare.

Your photographs show animals with very different horn shapes and some even atypical ones. How do you explain this wide disparity?

Indeed, there are many differences among bongo horns. The horns can be parallel, flared and with varying degrees and depths of spiral. In some animals, the horns even cross one another. This phenomenon occurs mainly amongst females. The reason for the wide disparity in horn shape is, however, still a mystery to me.

Which morphological signs allow you to distinguish the bulls from the cows?

As in all species where males and females carry homes, the differences between the sexes is not easy to determine at first sight. Apart from the male’s unique attributes (which are almost invisible when the animal is standing normally) it is useful to remember that the male is about one third bigger than the female. The huge and impressive neck of an older bull is another indication and its horns are usually much longer with thicker bases, between 25 to 27 centimetres (10 to 11 inches) in circumference. Within a herd, the bull can also be identified by his behaviour and attitude of dominance. When it comes to lone bongos, be careful, not all of them are bulls and I have frequently found females on their own.

How do you hunt bongo in CAR?

Depending on whether it is wet or dry, I use different hunting methods to suit the occasion such as tracking, gentle flushing or still hunting from strategically located tree stands. This latter method produces excellent results and, although it is not the method I prefer, it does allow for careful assessment and selection of animals.

What is your opinion about hunting with dogs?

I have never hunted bongos with dogs so I find it difficult to express an opinion. However, the method has an attraction for me. After all, man and dog have been inseparable hunting companions since the dawn of time.

Your fondest memory of hunting bongos?

It is not one but, actually, two successive occasions. Early one morning one of my clients shot a superb bongo bull the horns of which measured 87 centimetres (just over 34 inches). After taking photographs and skinning the bull, we went back to the tree stand overlooking the salt lick at about 08h00. There we found a herd of 19 bongos waiting for us. I went crazy and machine gunned them with my camera. Without doubt, the entire morning remains one of my greatest memories.

What constitutes a good bongo?

Firstly, let me say that the track of a large bongo bull is, on average, nine to 10 centimetres (3 1/2 to 4 inches) wide. This provides a sound basis for making a decision whether or not to track the animal. Also, the hunter needs to be aware that the bongo horns grow rapidly. They can reach 65 centimetres (25 1/2 inches) in length by the age of three. A good bull is one whose horns reach 70 centimetres (27 1/2 inches) in length and a big one has horns which measure at least 80 centimetres (31 1/2 inches). In the heat of the moment it is rare to find time to examine the shape of the horns but the best for me are those whose horns flare outwards and have a lyre shape. When a bongo bull has a big body, a thick neck with wide, flaring horns in a nice amber brown colour, which end in white tips, it is a good trophy and certainly a mature or old bull.

How are bongo faring in CAR?

Despite frequent poaching with both shotgun and snares, the species is doing well in all the Central African hunting areas where it can be found. Most safari outfitters have seen an increase in their quotas and results. My own explanation for this, and it is only my opinion, is that this has to do with the extermination of elephants in the region by Sudanese and local poachers. In the absence of elephants, the forests become thick and overgrown and provide the necessary tranquillity for these timid antelopes. Secondly, I think the safari outfitters have also taken note of this increase in bongo numbers and have paid special attention to them by both strengthening their anti-poaching efforts and also by preventing illegal diamond mining in their concessions. Furthermore, they have improved and increased the number of salt licks in their concessions which help to retain the bongos in these areas. I am convinced that a 40 inch bongo will be taken in CAR in the not too distant future.

The bongo is an animal of the twilight. He wears a coat of light. His beauty is a reflection of his majesty and is quite unforgettable once seen. To be able to spend time in the presence of one is an experience of a lifetime. To hunt one successfully, is a gift from the hunting gods.