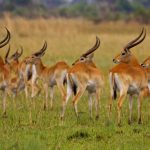 The headline article in the business section of yesterday’s main South African Afrikaans Sunday newspaper, Rapport (3 May 2015), was entitled Doodskoot vir jag? Kunsmatige teel van wild “skaad SA se reputasie as eko-bestemming” (Death knell for hunting? Artificial breeding of game “damages SA’s reputation as an eco-destination”). Other subheadings, translated into English read: “Overseas hunters do not want their friends to ask if the animal was bred in a small paddock” and Mr. Johann Rupert’s comments that: “It comes down to a crudely constructed Ponzi scheme,” when referring to the recent trend of intensive breeding, domestication and manipulation of wildlife to produce exaggerated horn lengths and unnatural colour variations.

The main photograph shows what appears to be a live but drugged and blindfolded kudu bull whose head is being held up so its horns can be measured by the man second from the right with a tape measure draped around his neck. Why would he be doing this? Is it to allow the animal’s horn lengths to be described in an advertisement as part of a put-and-take killing operation or shopping and shooting event as it is also known? Or is there some other reason for the operation? If it is the former, then clearly it has no place in hunting.

This article had its origins in an exchange of smses between Mr. Johann Rupert and me because much has been made by those promoting the “businesses” that have grown up around this trend of the fact that Mr. Rupert, the most successful South African businessman of his generation, acquired a buffalo bull for R40 million (roughly $3,3 million). Time and again he has been held up as an example and put forward as a reason why others should enter this “business”. After all, if a man like him is prepared to put his own money into something like this, it must not only be a good money-making proposition but an honest and ethical endeavour to boot. Not so?

No, not so! Mr. Rupert went so far as to grant an interview in Landbou Weekblad making his views on the matter clear. His buffalo, Grootbaas (Big Boss), gave him much pleasure but he warned others against entering this “business” to make money. Still his name continued to be taken in vain to promote the very thing he counselled against. He made his views clearer still on twitter but his name continued to be used without his permission or knowledge. I was approached by Neels Geldenhuys, editor of African Outfitter, and asked to contact Mr. Rupert in this regard because I once worked for him. I sent him an sms and set out below is the exchange of messages that followed:

Dear Johann,
Happy Easter. I hope this sms finds you and yours fit and well.
It will be no secret to you that, despite the article in Landbou Weekblad, your name continues to be used to promote the intensive breeding, domestication and manipulation of animals to produce exaggerated horn lengths and colour variations.
I am sure that, in many if not all of these instances, your good name has been used without your permission and often your knowledge.
I have been asked to contact you to find out whether you would be prepared to write/grant an interview to produce a more definitive article opposing these practices, which are manifestly bad for the hunting community and conservation in South Africa.
The latest article I have written in this regard can be seen on the blog on my web site – www.peterflack.co.za.
I hope you will say yes and look forward to hearing from you.
Kindest regards,
Peter

Hi Peter
I have consistently warned against these practices, it is NOT conservation, but a crudely constructed Ponzi scheme. As such the innocent will lose their savings, and South African conservation will get a very bad reputation. How many times must one repeat the warnings before the bubble bursts?
J

Thank you so much for your crystal clear and unequivocal statement, Johann. To be honest, it is what I expected from you. May I please quote you?

With pleasure, I have tweeted something similar.

Bless you and many thanks.

BTW, Tyson’s death was probably caused by walking around in a small paddock, covering too many cows. My buffalo roam around in the wild for 90% of the time. Only bring them into four separate 100 hectare feeding areas for DNA testing when new calves are born. They eat what they want or need! Same as Thabo Tholo. No “supplementary feeding”…..

Very interesting. I never thought of that. But then I have never tried to actively breed wildlife. The more natural the better I believe – both for the animal and the conservation.

They are breeding/feeding the animals in small camps – apart from the artificiality of the progeny, the animal behaviour also changes. “Grootbaas” still wants to kill everything in sight….

Sounds an amazing animal. I would love a photo of him in a natural setting for my next book on the five buffalo subspecies.