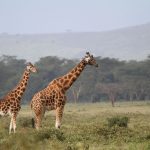 The answer to this question is a resounding and unequivocal, YES. At the risk of boring the reader with facts and figures as opposed to emotion and innuendo, let me state the following empirically determined, scientific facts: